Book Of The Week "Broken Routine" 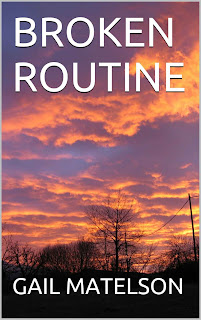 Hey everyone,
The Book of The Week is…
Broken Routine by Gail Matelson

Dan Wiseman was passionate about his job, almost too passionate to realize that he was falling in love. Dan was an investigator for the District Attorney’s office. He had been handed an assignment that proved to extend beyond the initial crime.

Ryan Albright managed to avoid conviction, primarily because his first court case was only a stepping stone in his plan to commit the perfect murder. Ryan was handsome but arrogant, and believed that he could outwit Dan or any other member of the prosecutor’s team.

Ryan survived an abusive father and the murder of his mother, but the betrayal of his girlfriend proved to be his undoing. Creating a plan of revenge consumed four years of Ryan’s life and was the primary motivation for each and every move that he made. He targeted Gaya Asher because of her routine pattern of behavior and the ease with which she was manipulated.

Dan is challenged by Ryan Albright’s unpredictable actions and he is intrigued by Gaya’s predictable and routine lifestyle.

Make sure to show the author some Love and check out her book!