Book of the Week "The Battle for Halcyon" 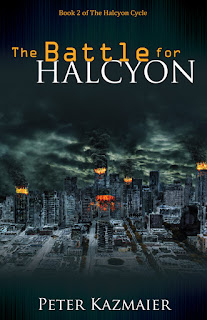 Hey Everyone this weeks pick is "The Battle for Halcyon" by Peter Kazmaier
In the first book of The Halcyon Cycle, a risky physics experiment transports the island University of Halcyon to a new world. Meglir, a being of great power, is released from his prison and threatens Halcyon and the tiny refugee colony of Eleytheria.


In The Battle for Halcyon, we follow the struggles of Dave, Al, Pam and Floyd with their Hansa allies as they work to stop Meglir’s army and find a way to return Halcyon home to its own space-time. Surprising new facts about the continent of Feiramar, her peoples, and her history unfold. A new menace, in league with Meglir, threatens from the east. Will Halcyon continue to follow its program of tyranny to establish a secular utopia? Can Meglir be defeated? Can the island University of Halcyon undo the dislocation and return home?

Make sure to check out his work Click Here
Posted by Unknown at 1:27 PM