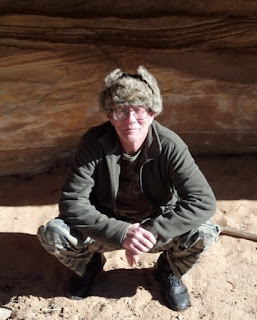 
Today in Authors Corner I have the pleasure of interviewing R.F.G. Cameron who is the Author of “Regeneration” Series

Thank You R.FG. Cameron for being a part of my Author’s Corner!

Time for the Interview!!!!!

Always my 1st question, Why do you write?

A: I write because it's about the one way for me to get new dreams. As a kid I wasn't that afraid of the dark because I'd imagine a storyline to go to sleep, and eventually began visualizing them as I fell asleep.

When was the deciding moment for you to become a writer?


A: I wrote a few stories back when I was 12, and received such underwhelming support from family that I didn't get serious about writing again until I was about 35.


What are your ambitions for your writing career?

A: My main ambition is for my daughter(s) to read my work once they're grown, or at least old enough to read books rather than chewing them up. If I'm lucky they'll be able to get handle on the reality parents aren't just minions, we also have lives and imaginations.

Is this full-time or part-time for you?

A: It's definitely a part-time gig at present.

How is your day structured, do you have a special time to write?

A: As a stay-at-home parent with a precocious 21-month-old tiny demon princess (the size of a three-year-old), I write or edit when She takes a nap and there's nothing else pressing to do.

Where do your ideas come from?

A: I could tell you, but even I'm not always certain. Some days I just wake up with a big "What if..." scenario to be worked out.

Since this book is part of a series do you mind telling us a little about it?
A: I have two books released that are part of a four story series, though each is basically a stand-alone set in one reality. I'll be working on editing the zeroth (a.k.a. prequel) within a couple months, and I'm waiting on the cover art as well. The last installment is almost finished. The illustration was inspired by one of the characters in the book I'm editing for release, as I find time.

What are your thoughts on writing a book series?

A: A series takes time and dedication, but shouldn't be of the cliffhanger type. Readers like to get used to a fictional reality, they like to read about new characters and their lives, and if done well a series can keep readers asking for more.

How much research do you do?

A: I spend a lot of time on research, and the Wife has asked me a few times who is more important, her or the fictional characters who keep insisting on having their stories told.

Do you read much and if so who are your favorite authors.

A: I read when I have a chance, which isn't easy with a tiny demon running the house. Among my favorites; Andre Norton, Larry Niven, Jerry Pournelle, Zeena Henderson, Fred Saberhagen, and the list could go on for a page.

Which writers inspire you?

A: Every writer who tells a story well inspires me.

Do you work to an outline or plot or do you prefer just see where an idea takes you?

A: I'll write down a few details on an idea, and when I get back to it I'll see where the characters lead me.

As a writer how do you think you’ve evolved creatively as?

A: I no longer try to pound out 60,000 to 70,000 words in two or three weeks like a demented gibbon with a mission. After going back and wondering what I was thinking in various parts, it's easier to take my time.

What is the hardest thing about writing?

The hardest thing about writing would be getting through all the different storylines I have backlogged.

What was the hardest thing about writing your latest book?

A: I suppose it would be wrapping things up; knowing when to say it's done.

What is the easiest thing about writing?

A: The easiest thing for me would be visualizing the world or reality I'm writing about.

Give us a small insight into your main characters, what do they do that is so special?

A: I think my main characters, while having different natures and personalities, all fit under the label survivors. They all refuse to give up, whether they're fighting for their own survival, fighting for someone who depends upon them, or fighting to reset balances in a world where civilization has gone wrong.

What advice would you give to aspiring writers?

A: If you don't feel driven to write, and write the best story you can, don't do it. Writing isn't about making money or getting famous; it's about telling stories that leave people wanting to read more of your work. It's also about having to sleep on the couch at times if you're married or have a significant other in your life.

Last Question, How can readers discover more about you and you work?


A: The links below will lead people to my work, and in the case of GoodReads I do blog once in a while. I have a policy that I will send free e-copy if I'm contacted, and that is especially true for former or current service personnel.

Make sure to show him some love and check out his work!