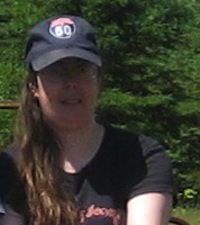 Welcome back to Author’s Corner!

Today I have the pleasure of interviewing Jennifer R. Povey, She has self-published multiple books including “Transpecial” and “The Silent Years” sequence of novellas.

Before we start with the interview Jennifer here is a bit about Jennifer!
Jennifer R. Povey is in her early forties. She lives in Northern Virginia with her husband of eighteen years - having moved here from England. (Yes, she still has the accent). In addition to writing, she enjoys roleplaying games, horseback riding, and being a voracious reader. She writers science fiction and fantasy fiction, as well as writing for gaming companies and has even had a comic script published (In the You Are Not Alone anthology from Grayhaven Comics). That's as well as freelance writing and proof reading.


Now on with the Interview!


Why do you write Jennifer?
It's what I do. I wrote fan fic and casual stuff for years before deciding to go serious a few years ago. I'm good at it, I enjoy it, and honestly I've never been able to stop making up stories in my head.

What are your ambitions for your writing career?

I have a lot of ambitions! I have quite a few more novel ideas I want to get out there. I'd also love to do an ongoing comic book. And I'd like to try my hand at writing a movie script at some point. There's also a few magazines I want to sell stories to that I haven't yet. Mostly, though, I want to write things people enjoy.

Do you have a special time to write or how is your day structured?

I don't really have a "special time to write". It depends on what I have to do that day - and obviously not everything I do is writing. There's also the endless editing...a lot of people think we just sit down, write, then hand it over to somebody. It's not that simple, sadly!

Do you write every day, 5 days a week or as and when?

Right now I'm kind of writing fiction cyclicly. I might write 5,000 words one day and only a few hundred the next. I do write at least something every day.

Do you aim for a set amount of words/pages per day?

Generally, no. I'm more likely to set a certain amount of time for writing - an hour or two of sitting down and getting the words out. I've tried the set amount of words thing and it doesn't work as well for me.

Do you proofread/edit all your own books or do you get someone to do that for you?

Everything I release is professionally edited with the exception of a web serial I have called Making Fate (that one I do edit myself). My husband is my proofreader (he's a technical editor for a non profit, so he's pretty good at it).

Which writers inspire you?
Oh, that's a long list. Transpecial has been compared to Heinlein - and that one's quite intentional. I also try for the transparent 'story first' style of Isaac Asimov in a lot of my work. Jules Verne triggered my desire to write science fiction and, of course, you can't deny the influence of Tolkein. Making Fate is urban fantasy and shamelessly influenced by Joss Whedon's Buffy. So, yes, a long list.

I read voraciously and I let it all inspire me to some degree.

Where do your ideas come from?

Oh, not this question. They come from...all over the place. Some of my science fiction stories come from science fact articles I read that week. I write to anthology calls a fair bit, and in that case the idea generally comes from the call. A Star To Steer By, which is probably my best published story, came from a call about soldiers returning home, got rejected by the call and then bought by Analog. (Lesson there: Don't worry about rejections!) Transpecial started with the title and was originally supposed to be about somebody physically becoming something other than human, probably subconsciously inspired by Delenn's cocoon in Babylon 5, then it morphed into a first contact story on me. Oops.

How do you think you’ve evolved creatively?

I've become more focused. Honestly, the reason I didn't start writing seriously until my thirties was because I couldn't get anything finished until then. I started so many novels in my twenties! I also would have told you when I was twenty, twenty-five, that I could never write to order. Now I do some of my best work when being basically told to write a story about X.

What is the hardest thing about writing?

Can I say marketing? I'm not a natural salesman, I freely admit it. I find marketing and promotion and networking all a little bit stressful. Probably because I'm an introvert.

What was the hardest thing about writing your latest book?

Really, I'd say Making Fate is my latest "book" and the challenge has been trying to learn to write in a more episodic form. I don't have it down yet, but I'm getting there. That and right now I have a character who's taken more prominence than planned and she's proving harder to write than some of the others.

What is the easiest thing about writing?

Sitting down and writing the first draft. Telling the story. That's easy. Then, well...then I have to edit the thing.

Give us an insight into your main character. What does she do that is so special?

Which one? I'm going to pick Suza MacRae from Transpecial. She's autistic, and that allows her to work with the aliens in a way most people can't. She's also a very strong character in ways that aren't what a lot of people think of as the "strong female character." (I have real issues with that trope - Jane from Making Fate is very much in that trope, but it sometimes seems that people want every female MC to be that way, especially in visual media. I'm thinking of some of the complaints about Jupiter in Jupiter Ascending now).

What advice would you give to aspiring writers?

You are not your work.

Your work is going to be rejected. You're going to get form rejections from agents, from publishers, from magazines.

If you're in a writers' group, your peers are going to take your work apart. And when you start working with an editor...

It's very easy when you first start out to take criticism personally. It's very easy to kind of let yourself and your work overlap.

You are not your work. It's not personal. Learning to realize that and develop the thick skin that keeps you from bursting into tears every time you get rejected is one of the most challenging aspects of being a professional.

How can readers discover more about you and your work?