Welcome Back to Author's Corner 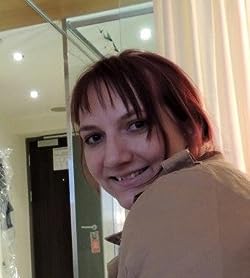 Today I will be Interviewing Misha Gerrick

Misha Gerrick has been creating stories long before she could write and is currently going after her dream of making a living as a writer. She is the Author of The Vanished Knight and The Heir's Choice.

Now On To The Interview!

Misha,why do you write?
This is a tricky one for me. I guess the simplest answer would be that I love creating stories. I started long before I even knew how to write, and it just naturally progressed from there.

What made you decide to sit down and actually start something?A character who appeared in my head while I was reading. I was thirteen and I thought I’d have the writing thing waxed. The first time I sat down and actually decided to finish something I wrote was also when I had a character walking into my head, and after seven failed attempts, I decided to get serious and get it done. That book went on to become the first two books in The War of Six Crowns.

What have you written?
At the moment, my finished draft count stands at nine books in seven genres. Two of those books are now published. I'm hoping to publish quite a few of the others next year.
Where can we buy or see them?
The Vanished Knight and The Heir’s Choice are available on Amazon, Barnes & Noble, iTunes, Kobo, Scribd and Oyster.

You can also find them both on Goodreads (see the link to my profile below.)

Give us an insight into your main character. What does he/she do that is so special?I think the special thing about Callan is that she keeps trying even when she’s hurt and tired. In the first two books, she’s trying to find out about her past. Later on, we’ll see more of her grit as the situation becomes more challenging.

What are you working on at the minute?
Right now, I’m waiting for an Urban Fantasy to come back from my editor. It’s called Endless and I’m hoping to see it published by November 2015. Then I’m currently rewriting a dystopian that I hope to publish early next year. (Rewrites are standard to me, since I rough draft by hand.)

What genre are your books?
The War of Six Crowns is a YA Epic Fantasy series.

What draws you to this genre?
I just loved the idea of being able to go to another world as well as the complexity I could work with in this series.

How much research do you do?
I do quite a bit, but usually I research as I edit so that I can fix things I’ve written. Although that said, if I have a story that’s heavily based on reality (such as a historical) I read a lot of stories from or set in the time period so that I can get a feel for the “world” I’ll be working in.

In The War of Six Crowns, I researched how the foster care system works in England (which made for an interesting detail for later in the series), technical terms for castles, Cumbria, as well as taking Western Martial Arts and horse riding lessons.

Tell us about the cover/s and how it/they came about.
Basically, I wanted something clean, simple and modern but with an old-world feeling since the books are very much about the meeting of the modern world with a more medieval fantasy world.

How do you market your books?
At the moment, I’m taking a more soft-marketing approach, since I don’t think hard-selling helps me do anything except upset the people I’m “shouting” at.

So with regards to marketing, I’m taking more of a long-term view. (Which includes not screaming “Buy my book!!!” at people.)

Why did you choose this route?
I decided to go this alone because these two books were signed to a small publisher and the experience left me… jaded. Short version of the answer: Why should I give 60% to 85% of all income generated from my hard work? Especially when the people I’m paying aren’t technically offering me something valuable for my money.

What part of your writing time do you devote to marketing your book?
Basically, I do my social networking things (Note: Passive Marketing) in the quiet times of my day-job. I don’t see it as lost time because during my day-job hours, I can’t afford to be sucked into writing my stories. Because once I start writing, I basically go blind and deaf to everything else.

What do you do to get book reviews?
I just ask everyone offering reviews if they’re interested in my books. If they say no, it’s okay, but the number of people who say yes are still more than I would have had if I didn’t ask. Also, I’m seeing a lot of people leaving surprise reviews, just because they enjoyed my book, and I like those books.

What are your thoughts on good/bad reviews?
So far, my story is (mercifully) bad review free, but I try to take a philosophical stance toward it all. The War of Six Crowns does play around with a lot of things that fantasy readers might consider rules, and that means I’m due to get someone who hates it at some stage.

The thing is, I made an artistic decision on more than one occasion, and that’s fine. But it also means that I must keep my big girl pants on when people don’t like what I decided. I made the call, I bear the consequences.

What advice would you give to aspiring writers?
Don’t compare yourself to other writers. It’s completely senseless, because you don’t know what went on behind the scenes. It’s destructive, because trying to emulate someone else ruins your own style and voice. It’s hurtful, because if you think you’re so far behind compared to someone, you don’t see how far you’ve already come.

Where do you see your publishing going in the future?

I’m planning on releasing between four and six books per year for the next five years, with the stated goal of earning a sizable income from my writing. It’s actually a purposefully huge goal, so that even if I fall short, I still make a living from my writing. (A tenth of my goal is equal to my salary.)

I truly hope that one day my books will be widely read, but to be honest, I’ll be happy with a loyal if small fan-base who writes me letters to squee with me about my characters.

As for huge publishing deals, I won’t say I’ll never sign one if it was offered to me, but it had better offer me something worth it before I do.


How can readers discover more about you and you work?

Website: http://mishagerrick.tumblr.com
Blog: http://Sylmion.blogspot.com
Twitter: @MGerrick1 (if you’re not interested in the nitty gritty of writing) @MishaMFB (If you are.)
Amazon Author Page: http://www.amazon.com/Misha-Gerrick/e/B00NHAQTW8/ref=ntt_dp_epwbk_0
Goodreads: https://www.goodreads.com/author/show/7325569.M_Gerrick

Thank You For Stopping By!

Make Sure you Check Out Her Work!